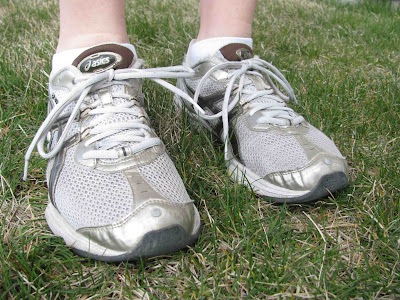 I hated running. I played track in high school but only socially, and would frequently find reasons to walk most of our longest jaunts. The burning lungs, the shortness of breath, the sore and tired muscles. What is there to like? Some people make it look so glamorous, but it feels as far from glamorous as can be.

But now… I guess I’m a runner. Aristotle said, “You are what you continually do.” Other than a 2-month break four months ago when I was very pregnant with my first child, I think I’ve run 2-3 times per week for the past seven years. I can’t believe I’m saying this, but the 1/2 marathon has become one of my favorite things.

Lately, running has seen a drastic spike in popularity. More often than not, whenever I self-disclose as a runner, people say, “I wish I could be a runner.” And I always say, “You can! I believe in you!” And they say, “But it’s SO hard!” I agree. It is hard. But you can do it.

As a former hater and a converted lover, I thought I’d start a blog mini-series with some ideas I have about how to be a runner if you aren’t and how to stay motivated if you are. If you care, stay tuned. If you don’t ever aspire to be a runner, know that there are tons of more important things to be and that I believe you still have significant things to contribute to our planet. Plenty of my nearest and dearest are non-runners.

Howard’s Pennant Garland
How to Be a Runner. For the run of it: Vol 2. Start now.