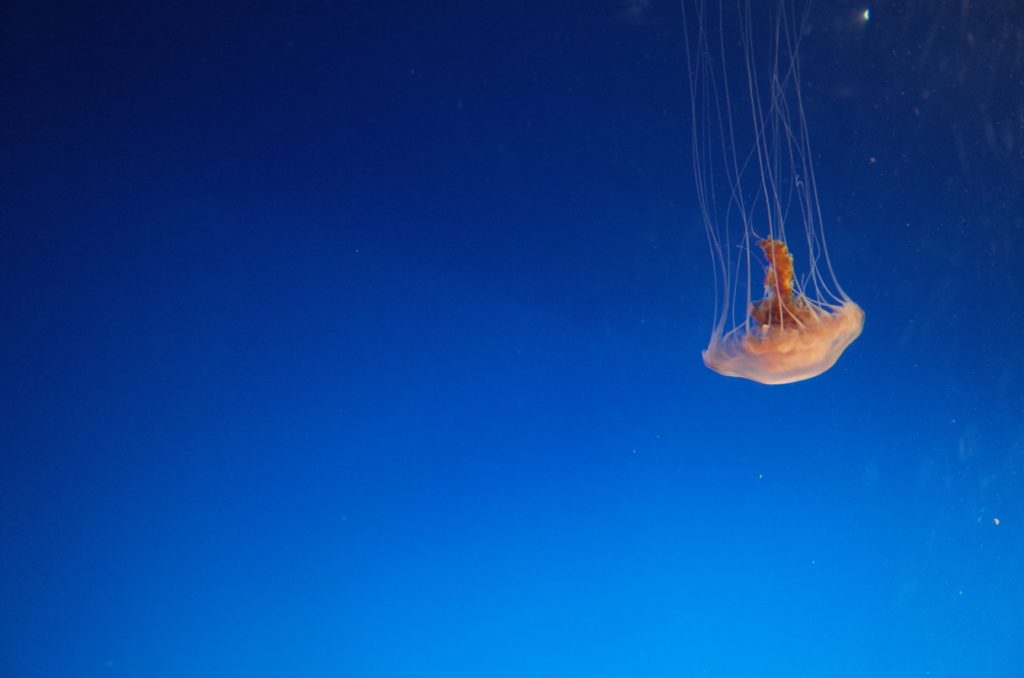 In Ishmael (which I briefly reviewed here), Daniel Quinn tells a story that keeps returning to my thoughts. I will retell it to you here in the way that I retell it to myself, though I cannot guarantee that my memory of it will have entirely very much in common with Quinn’s original story. Nevertheless, it went something like this:

A man (with an especial interest in anthropology) was entirely alone on the undeveloped earth. (Think pre-civilization, not post-apocalypse.) The man wandered all over the planet, looking for life. Finally he arrived at the sea. Walking along the beach, he came to a jellyfish washed up on the sand. “And how did you get here?” he asked the jellyfish. “Oh!” said the jellyfish. “Well, in the beginning there was nothing except God. Then one day God spoke and into existence came light. On the next day, God made the atmosphere – the space between the waters here and the waters way above us. On the third day, God made dry land between the seas, like this very sand we’re standing on and….” here the jellyfish paused for dramatic emphasis, “…plants! Millions and millions of delicious things to eat, like phytoplankton. Then, on the fourth day of this particular week, God shaped the sun and moon and stars, effectively making what Time is to us – the seasons and rhythms. But on the FIFTH day,” here the jellyfish sucked in his tentacles a bit with a sort of self-conscious modesty, “on the fifth day, God said, ‘Let the waters swarm with swarms of jellyfish!’ And here we are: Jellyfish. The crowning jewel of all that God made.”

Boy, have I come to love that jellyfish; what a personality! 😉

Anyway, it may be stating the obvious, but Quinn was using the jellyfish’s origin story to poke some holes in our western origin story… a story that inevitably ends with what can sometimes be a very narcissistic, unconcerned dominance that results in oppression of all kinds – ecological, spiritual, sociological, biological, relational, etc. If I were to summarize Quinn’s critique, I’d say that he saw the predominant cultural stories of the west (though not always explicitly articulated) as culminating in the idea that: the world was made for mankind or, to say it another way, that the end of the world is mankind. Quinn longed, I think, for something bigger and better than that story…a Story that would have space for all of the jellyfishes and all of the humans, but something that could leave Life to live itself out and something that could give Life to the lives all around it.

So: I’ll let you read Quinn for yourself, but his ideas have planted a few really good questions in my psyche. Questions like: What if all of the saints and mystics are right – what if the world is God’s and everything in it? What if the entire world was made for God? What if humans have been charged with the Responsibility and Gift to partner with God in leaving Life well enough alone to live itself out? and in bearing and bringing more Life to everything around us? What if the Life we are to enjoy and in which we are to participate is an ever-inclusive kind of Life with ecological, spiritual, sociological, biological, relational, etc. ramifications?

How have I been sucked into the self-centered, human-centered origin story? How have I taken advantage of the Leadership and Responsibility God gave me by wielding my power to misuse and abuse the Life in and around me? How am I a Taker rather than a Leaver/Giver (again: ecologically, spiritually, sociologically, biologically, relationally, etc.)?

Just a few small thoughts for your Tuesday start-to-a-four-day-week. 😉