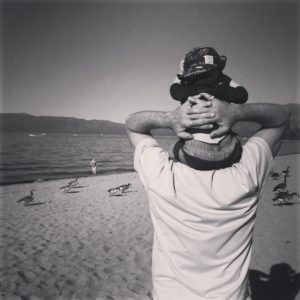 For the next forty days or so, we remember Jesus’ final few weeks of ministry, on his way to the cross and the empty tomb. During these final weeks, Jesus did far less feeding, healing, and teaching ministry to the crowds than was usual for him at the beginning of his ministry. Rather, he spent most of his days in the simple, intimate community of his twelve disciples.

I wonder if he ever felt a little bit nervous. Here he was, knowing that he was going to be crucified in a very gruesome, very public death. For a few days, this would look like a very dead end to all that he had built in the past three years of full-time ministry. This would look like an abysmal failure for all that the Jews had hoped the Messiah would be. And then, three days later it would look positively absurd: an empty tomb. Lots and lots of people would never believe it. Would anyone believe it?

I wonder if he ever had twinges of uncertainty about this plan. He was staking his entire ministry on these twelve, well, these eleven men. The crowds were too wishy-washy (from “Hosanna in the highest!” to “Crucify him!” within just one week?!) to be the leaders and disseminators of his kingdom after he was gone. He was counting on these eleven men to carry on his ministry – the proclaiming of the Good News of the kingdom (now in the very different light of the shadow of the cross and the brilliance of the empty tomb), the teaching of new disciples in the ways of Jesus, and the healing and reparative work this broken world needs. Would these eleven men have what it takes? Would they remember all that he had poured into them? Had he invested enough? Would they persevere through difficulties? Would they be up to the task? Would they just forget it all and run for cover?

There was only one way to find out.

Knowing that the Spirit would come soon must have bolstered his confidence in these eleven. Yes, he would be gone from them bodily, but in just a few days, he would be with them more intimately than he ever had been – pitching a tent, tabernacling, dwelling in their very mobile hearts by his Spirit.

It is during these rich Lenten weeks that my thoughts drift often to this spiritual legacy of which I am a part. I think of these weak, slow-to-understand, distracted, fiery eleven men who were virtually all that remained of Jesus’ ministry when he left to take his seat at the Father’s right hand. Against all odds, but alongside the Spirit of God, Jesus’ plan worked. The eleven men held on and the Good News was spread far and wide. Sometimes it spread to thousands at once — quickly and broadly, like wild fire. Sometimes it plodded along, slowly, steadily, from individual Jesus-follower to individual Jesus-follower. The eleven passed along the love of Jesus to their spiritual descendants, who demonstrated Jesus-following to their spiritual descendants, who shared the Good News with their spiritual descendants, who told the Jesus story to me. And I will sit in our beautiful sanctuary this Lenten season – not in a pew, but rather on the shoulders of those who have gone before me in following Jesus. I will sit on Lenten Sundays and on Ash Wednesday and on Good Friday, remembering Jesus and learning more of what it means to live out the Jesus Way, all because of my spiritual parents, all because of their spiritual ancestors, all because of those eleven men, all because of Jesus.

On whose spiritual shoulders do you sit? Who reached out to you and showed you the way of Jesus? Who passed on this spiritual legacy to you?

And, 30 years from now, who will be sitting on your spiritual shoulders? Who will have learned about following Jesus from your hands, your heart, your life?

What an honor to be called, invited, counted in this generations-old spiritual legacy of Jesus himself and those faithful eleven men.

To hear more from Jocelyn on this topic, listen online to a talk that she gave at the Living a Spirit-Led Life Bible Study at GCPC. Go to: yakimagrace.com; on the side menu, click on the “Listen & Download” link, then on “Living a Spirit-Led Life.” Then under “Oh, for Heaven’s Sake Winter 2015,” click on the fourth link: 2015_02_03_OhForHeavensSake.